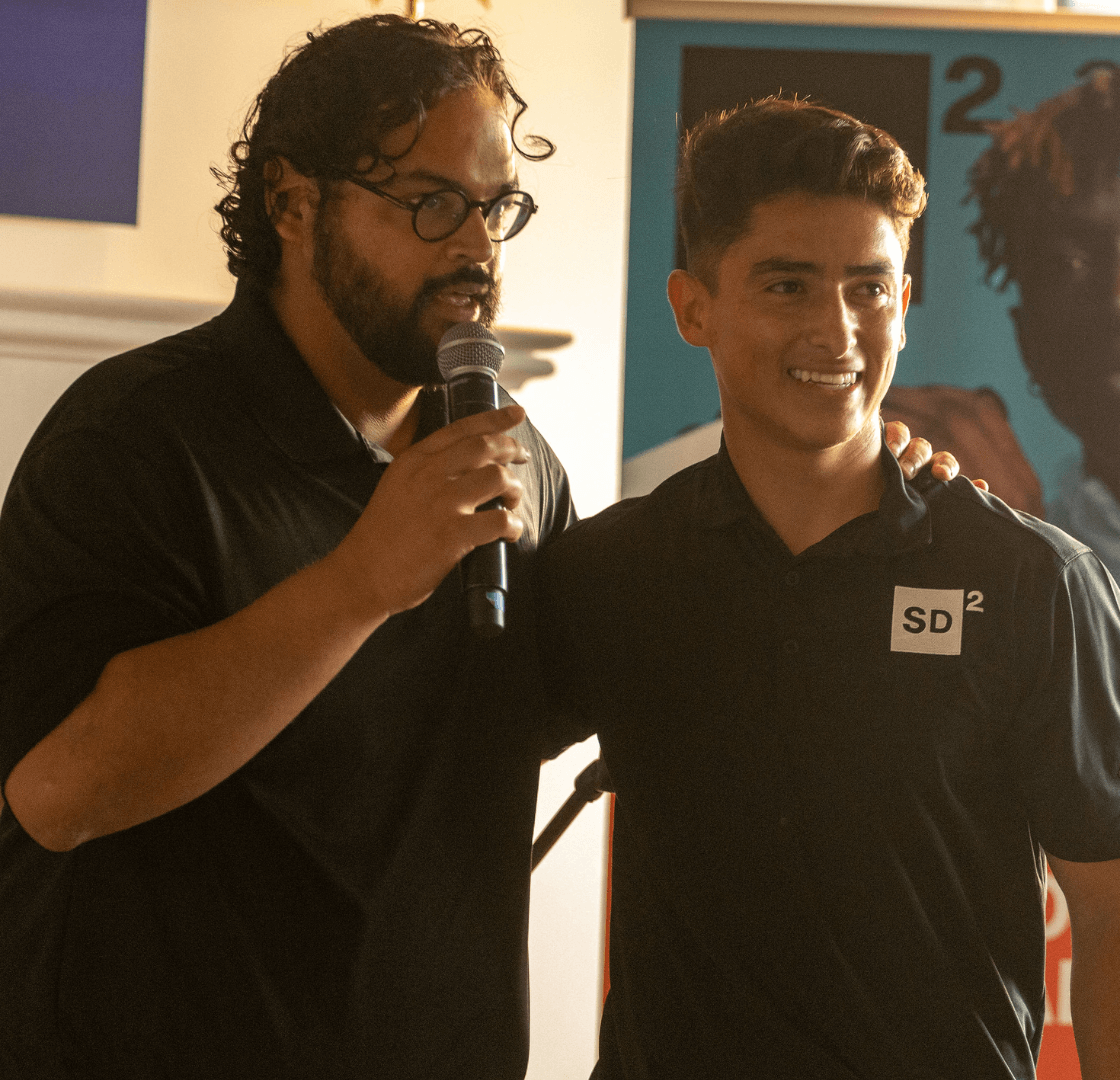 Always answer phone calls from unknown numbers. You never know who might be on the other end of the line.

Although he’s not typically one to impart advice, if he could offer a pearl of wisdom to his peers, this is a nugget 22-year-old Diego Hernandez would share.

It was one seemingly “random” phone call that changed the course of his life. But if you dig deeper into the story, the phone call wasn’t random at all. In fact, the seed was planted long before this part of his story took root.

The son of Mexican immigrants, Diego grew up admiring his parents’ drive and strong work ethic. His mother has served many years as a church secretary, and his father, Erasmo, runs his own landscaping and gardening business, Hernandez Landscaping.

From a young age, Diego was impressed by the way his father carried himself and wanted to model this example in his own life.

“Even after a long day at work, he was always there for our family and made sure we were provided for,” reflects Diego. “Even though he didn’t know the language at first, he still did it. He took the big jump to start his business.”

Following in his father’s footsteps and entrepreneurial spirit, Diego started helping with the family business when he was 12. At first, his duties were tasks like knocking on doors and passing out flyers to potential clients.

“My dad encouraged me to be confident and independent and start to buy my own supplies,” shares Diego. Even though he was nervous at first, he said, ‘yes.’

“I always say ‘yes’ and go into the unknown even though I’m scared and shy,” shares Diego.

Whether this means signing up for drama class to overcome his fear of public speaking or approaching a wellness coach in the gym at the Jackie Robinson YMCA, Diego has learned the value in taking risks and jumping in head first. Perhaps it’s no surprise that his favorite class in school was P.E.

“I was always the guy who tried really hard. I had perseverance in sports and wanted to impress the soccer coach,” he says. “I wanted to sweat and run and work, and this mentality led me to varsity and being captain.”

This mentality also led him to taking on more responsibility at Hernandez Landscaping over the years, handling smaller properties as the business grew. By the time he was 18, Diego had raised enough money to buy his own set of tools and a truck, a 2-door Toyota Tacoma.

Currently, he manages 3–4 homes all on his own.

Although he didn’t recognize it at the time, Diego was developing valuable customer service, business development, and marketing skills, not to mention people skills—all of which came in handy when he answered that fated unknown phone call.

The call was from Faheem Hasnain, one of Erasmo’s landscaping clients at the time. Faheem also happens to be a well-known biotech executive, the current Founder and CEO at Gossamer Bio, and a founding supporter of SD2. Faheem was chatting with Erasmo one day and asked him if Diego, then in his final semester as a Kinesiology major at SDSU, had any career prospects. When Erasmo said Diego could use some help, a lightbulb went off in Faheem’s mind that set off a chain reaction.

Faheem called Diego, and then he contacted H. Puentes, SD2 Co-Founder and CEO. The two met, and Diego’s connection with SD2 was born.

“SD2 is all about seeing the excellence that’s already there in people and connecting them directly to specific opportunities at STEM-driven companies,” says H. “We value the human connection above everything else. We’re not just dropping you off at the next stop—we’re empowering and guiding you along the journey,” shares H.

After chatting with Diego, H. learned about his interest in the life sciences and his growing curiosity about real estate, which arose from all the time he spent working on gardens and lawns for beautiful homes around the county.

The conversation spurred another phone call—this time to Chad Urie, Executive Managing Director at JLL West Coast Life Sciences, a commercial real estate firm. The next thing Diego knew, he was sitting down at lunch at Javier’s in UTC with H., Chad, and a group of JLL executives.

“Honestly, I didn’t know a lot about commercial real estate and that a whole group of people would be there,” says Diego. “Even though I didn’t totally know what was going on, I wasn’t afraid to just be myself and ask questions. If I didn’t know what a word meant, I asked and looked everyone in the eye,” Diego remembers.

It was this honesty, curiosity, and authenticity that impressed Chad and the team that July afternoon. To his surprise, Diego soon received yet another phone call—this time from Urie offering him a job as an Associate at JLL. Because they saw the incredible potential in Diego and how his unique skills and background could greatly benefit the company’s growth, they also offered to pay for Diego’s real estate license and provide him with special training to prepare him for his new role at JLL, which began January 9.  In this role, Diego’s primary duties will be making sales and managing contracts and orders for commercial real estate clients. We applaud JLL for believing in the power of diversity in science, technology, engineering, and math (STEM) and strengthening their team with talented employees who bring different perspectives to the company.

Diego isn’t quite sure where he envisions his career path leading in the future, but he hopes to eventually rise to a leadership role. As he looks back on the chain of events that led him to where he is today, he’s filled with gratitude and encourages other students with similar backgrounds to take action—today.

“Go meet people. Get out of your house. Go to networking events,” he advises. “There are so many people who want to help you, but they don’t know you exist. Let people know who you are and what your mission is. Don’t waste your time; do it right now.”

At SD2, our mission is to empower tomorrow’s STEM leaders today by connecting underrepresented students to the power of STEM, providing them with access to education, mentorship, and the resources they need to lead tomorrow’s workforce. Contact us to learn more about how we are empowering students to explore careers in STEM.

Allison Harden is a writer and editor passionate about education, storytelling, and helping underrepresented students achieve their fullest potential. A longtime tutor at Reality Changers, she has also served as a writing professor at her alma mater, Point Loma Nazarene University (PLNU). She’s proud to call San Diego her hometown, and she now lives and works in Austin, TX. Contact her at emdasheditorial@gmail.com.

The History of Black History Month