SD2 Co-Founders Bill Rastetter and H. Puentes share the story behind uniting to create what is now the roots for San Diego Squared. Driven by their pasts to rear an opportunity to elevate diversity, San Diego Squared was crafted and nurtured by first intention for strengthening diversity and inclusion in STEM. 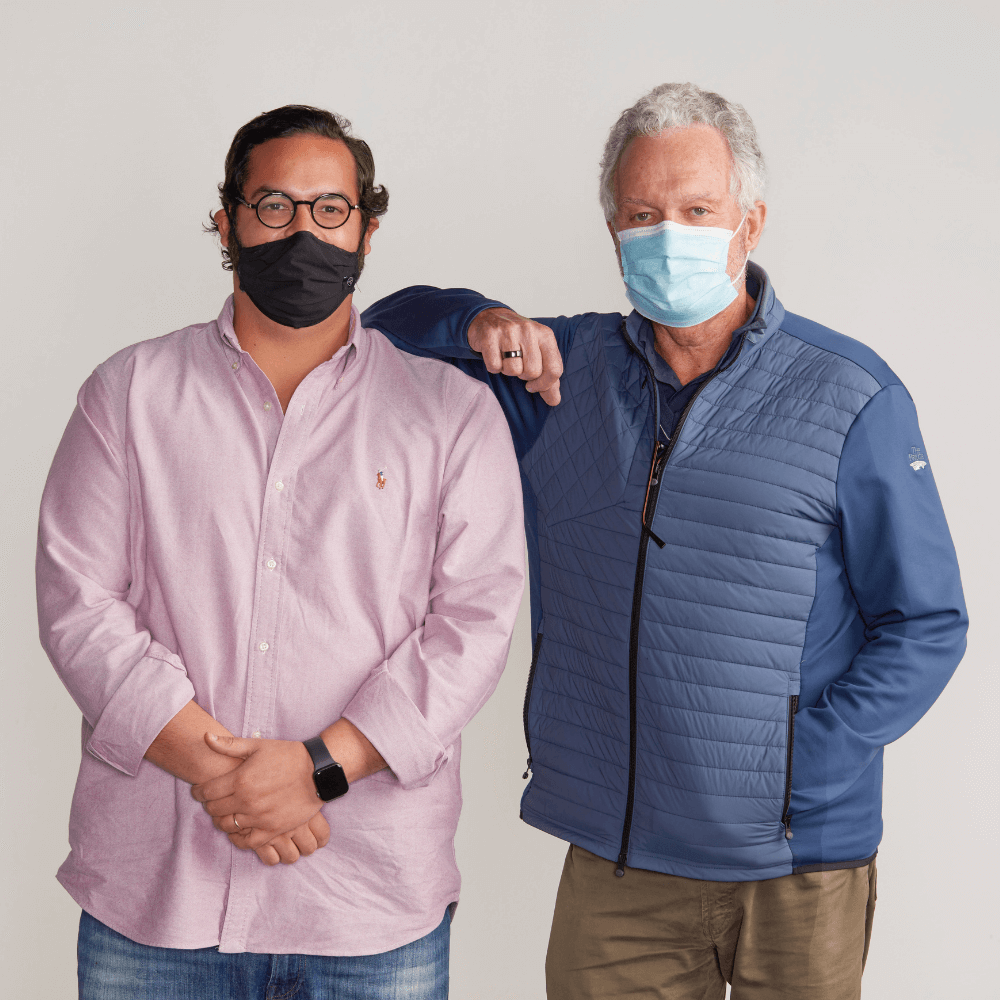 How It All Began: The SD2 Origin Story

Sometimes, when two people meet, what occurs is like a chemical reaction: the atoms, as they were before, are rearranged, and something new is created entirely.  One could also compare these moments to a photograph that captures a split second forever frozen in reality, never to be captured in quite the same way again.  Perhaps it was one such divine moment that took place when H. Puentes and Bill Rastetter, co-founders of SD2, first met.

“We were introduced through a mutual connection,” recounts Puentes. “I was speaking about Diversity and Inclusion at a Creative Mornings talk in San Diego in 2016 and getting married the same day,” he remembers.

It’s a good thing he fit the talk into his schedule that day.

This mutual connection, Sabrina Johnson, CEO of Daré Biosciences, was in the audience that day, and, years later, she remembered the talk and thought Puentes and Rastetter should meet.

She introduced the two via email, and they set up a time to talk.

“I was eating a pretzel in the Alps,” he laughs. “I ran for city council and lost some real connection with my wife, so we took off to Europe for the summer to spend time with her family and enjoy the little things.”

Little did he know when he said “yes” to meet with Rastetter what would unfold.
Only an hour before the meeting, Puentes did some due diligence and researched Rastetter’s background.

“I searched Bill and had an ‘Oh, snap!’ moment. Here I am with an icon in the life sciences that co-invented and developed Rituxan (the first monoclonal antibody medication to be approved by the U.S. FDA for cancer therapy.) With little time to really reflect before the call, I just ended up being myself and decided, who cares. Worst-case scenario, you just go back to cycling for my pretzels in the morning,” he jokes. “I just spoke from the heart and spoke my truth.”

Apparently, he took the right approach.

“I decided to surprise him and start the interview in Spanish,” Rastetter laughs. “I think he was a bit nervous, so we segwayed into English.”

“He speaks perfect Spanish!” Puentes recounts. “We connected on Spanish first. Then [Rastetter] was saying he wanted to make an impact in Diversity in STEM and asked if I’d be willing to support his effort. DEI in STEM is an especially popular trend these days, and many people can tend to be inauthentic, so I am naturally cautious before getting involved in projects,” Puentes says. “But I was very comfortable with Bill from the outset. I knew he was the real deal from day 1.”

It’s no surprise that Spanish was the connector that formed their initial bond. Both Rastetter and Puentes have roots in Latin America. Born in Panama, Rastetter spent his childhood and teenage years traveling around various countries in Latin America while his father served in the U.S. Embassy.

From an early age, he noticed the lack of integration between the different cultures, Latinx and “gringo”.

“What I found was that most American kids would make little attempt to learn Spanish or Portuguese,” he reflects. “They would interact with themselves and not across cultural lines, and it seemed very limiting.”

Even back then, he was certain there was a better way: integration instead of separation. So, he decided to change the paradigm.

“Instead of being like them, I integrated myself. It took a while, but by the end of my third year there, I was fully fluent just from practicing with my school mates.”

Puentes is the son of Colombian immigrants and describes his parent’s life akin to  scenes right out of a Netflix series. His grandmother, a seamstress in New York, was murdered on her doorstep. Too often he saw around him what he describes as “the wrong kind of money”.

“It’s not who I am, and I was too close to that reality. Then, when I was around 7 or 8, several other family members were taken away too soon, and everything changed.”

His parents moved their family to Texas to start a new path. To change community and trajectory for their sons.

Although these are mere snapshots from Rastetter and Puentes’ lives, they were the specks of light that began to form the negative that would later develop into the picture that is SD2 as we know it today.

Inspired by their backgrounds and the principles of belonging, connectedness, empathy, and authenticity, the two perhaps unlikely pair recognized their shared passion to bridge cultural gaps and create a sense of belonging for diversity in the workforce.

“In today’s STEM workforce, belonging is missing,” says Rastetter. “Diversity and Inclusion are important parts to the equation, but alone are not sufficient. If we can empower Black, Latinx, Indigenous students to know that they belong in STEM, then we will have achieved a tremendous amount.”

However, the problem goes both ways. It is also up to executives and companies recruiting employees to do a better job of representing the communities that surround them and adapting their search criteria accordingly.

“There is a keen desire among executives to increase diversity in their workforce,” Rastetter continues, but the problem is, the desire to diversify isn’t enough. There is still a gap in the actual employee base.

SD2 is on a mission to change that.

Puentes agrees. “Industry can do a better job meeting communities where they are and authentically building trust and letting the work follow from that trust. At SD2, we want to think about how to achieve this in a more nuanced way.”

And how do they plan to achieve this lofty goal? Three words: acknowledge, affirm, and act.

Rastetter cites a recent article in Harvard Business Review that astutely and simply frames the current issues SD2 seeks to disrupt, defining the course of action they need to take to address inequities, and enact meaningful change.

“We should acknowledge where we are as a diverse organization; affirm steps to advance our position; and act to implement change where change is warranted,” Rastetter wrote in a letter to executives in STEM-driven companies. “And identify where change will open more pathways for the recruitment, development, and advancement of a diverse employee base.”

And act, they are. At the core, it’s all about education and connection.

SD2 has four areas of focus: activation through events in the community, the Squared Fellows program for high school juniors, the Squared Interns program for college students, and the Squared Scholars program, which provides the much- needed financial support to students, educators, and other nonprofits working to bridge the diversity gap in STEM.

The diversity of career paths in STEM are vast, but we don’t do a great job of building awareness of that in all communities,” Rastetter shares. “So SD2’s goal is to show students the diversity of companies and careers in STEM and various paths they can take to get there.”

Although SD2 has a strong base of current partners, they are still in need of more high-tech companies in the area to join the fold so more people can access the many benefits the program has to offer.

“Our hope is to bring awareness to students with untapped potential that STEM is accessible to them, to provide resources, and connect them to diverse STEM professionals who are ready to help,” Rastetter says.

Scholarships, grants, and awards are not new tools to engage underrepresented students in STEM, but they aren’t enough.

For this reason, every scholarship they award for college, every high school student in the Squared Fellows program, and every intern they place through the Squared Interns program receives an industry mentor they can empathize with who shares some life experience and is committed to support them for at least one year.

It’s no secret that building a nonprofit from the ground up is a challenging feat. Finding the right people to be on the board, gathering enough funding to keep the doors open, defining who you are. There are many ups and downs, and always an ever-present chance of failure.

So, how does one survive? You could say the secret is in the sauce.

Puentes describes the “secret sauce” of SD2 as their ability to build an organization that has the relationships and network Rastetter and the rest of the SD2 Board has spent years cultivating to open up access to STEM-driven companies and their employees in an efficient and effective way. No other nonprofit is doing this today.

“We felt that was the ‘secret sauce’ of SD2, and that from there, we started to build, and that’s where we are today,” says Puentes.

Yes, there is a challenging road ahead, but these two visionaries are more than up for it.

Perhaps it all comes back to a photograph.  A photographer himself, Rastetter is more than familiar with the many ways science and art integrate.

“Just like certain elements of nature and our environment are worth capturing on film, they have a reality and force of their own frozen through reality,” he posits. “Reality is always advancing and changing…if you freeze reality in STEM, you freeze progress.”

Like a photograph of the ocean, the clouds may sometimes appear dark and ominous, but with a closer look, or a different perspective, you can see the ocean as a mirror reflecting the sky, and that’s where you can start to see the light come trickling in.

The light that leads the way for positive change and progress.

As Puentes puts it, it’s all about abundance and partnerships that are grounded in humanity.

“I’ve always had an abundance mentality and believe strongly in the power of partnerships. The more knowledge that’s out there, the more we can authentically build empathetic partnerships with the communities and students we are trying to empower, the more we can move the needle forward.”

SD2 as a photograph frozen in time tells a tale about an unlikely meeting between two individuals, yet much like a photograph, the aesthetic resonates through to a much greater purpose.

To learn more about how you can be involved in the program or to be a mentor, contact team@sd2.org.

How to Prepare for a Data Science Internship

Are you looking for a career with great growth potential? Do you enjoy math, statistics, pattern recognition, or science classes? If you answered yes to any of these questions and are looking for a career on the forefront of the trending future, then data science could be the career path for you. If you stop to think about it, data is involved in pretty much everything we do throughout our day. As we live in the age of technology, it’s no surprise that data science has become more prevalent. Take the internet for example. If you were to take two different individuals searching for the same topic online, they won’t get the same results. This is because of data science at work. When you type a search term into Google, data is being created. This data is then collected from many outlets and is used to personalize all forms of media that are delivered to you based on your search history, location, age, and myriad other factors.